Well. It’s been a while.

I promised that I’d come back and write more once I’d had the baby, but there really hasn’t been time (or energy). Oops. So while she naps across the room (for how long, who knows?), here’s the news in brief: 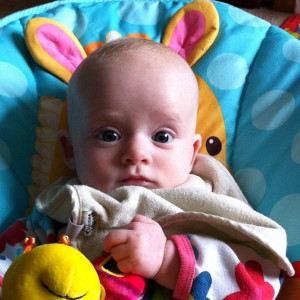 So in brief: here we are, three months on. Still alive. Just.

Erin is a curious, charming, relentless little character who likes songs about hedgehogs, is happy in the morning and grumpy in the evening, and doesn’t believe in napping during the day because the world is too interesting. She’s getting good at grabbing things, and gurgling. She looked a lot like her dad at first, but now she’s starting to look a bit more like me.

And next week, it will all have changed again.