On Channel 4’s 10 O’Clock Live this evening, Charlie Brooker provided an excellent rant about Cameron’s attack on multiculturalism in the UK. As part of this, he mentioned the Twitter reaction to another popular Channel Four series, My Big Fat Gypsy Wedding. As I pointed out on 18 January, much of the Twitter contrail has been full of casual racism and prejudice towards Gypsies.

To illustrate this, Brooker read out some tweets, which were shown on screen.

Now, the way that Channel 4 displayed and credited the tweets which Charlie Brooker read out on screen weren’t only contrary to Twitter’s clear guidelines about use of tweets in broadcasts

…but they also appeared to attribute the offending words to Twitter users called Phillip, Anabel and Hooligan. 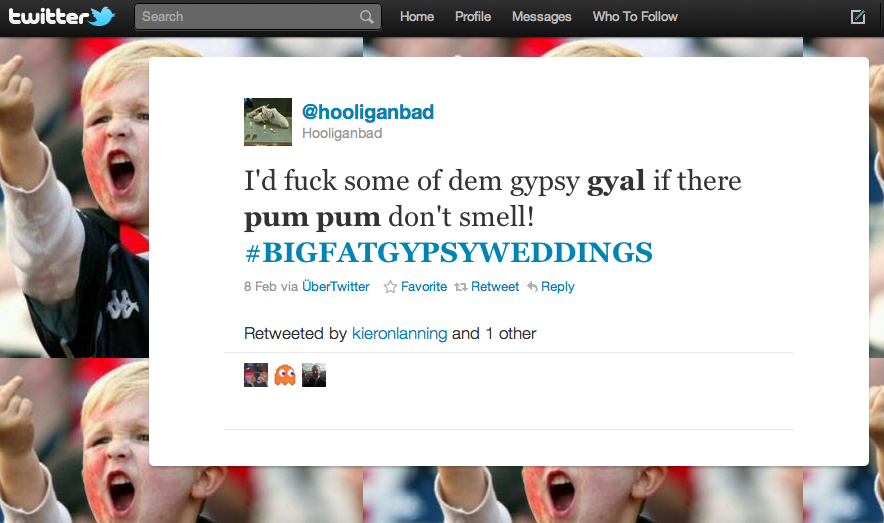 …and not, in fact, @phillip (a programmer from Portland, Oregon), @anabel (a renegade psychologist from Mexico) or @hooligan (a writer in California who hasn’t tweeted since August 2009).

So what happened here? My suspicion is that whoever prepared the research, on-screen graphics and script for that segment of the show wasn’t sufficiently familiar with Twitter to recognise that that there’s a difference between real name and username, and that they had accidentally put offensive words into the mouths of unsuspecting Twitter users.

And what’s the moral of this story? If you’re displaying tweets on screen (or for that matter, in print), be aware of the Twitter usage guidelines for media, be familiar with the product and how it’s generally used, be careful to respect the company and community and be mindful that an unintentional slip could very likely land you in hot water.