I missed the actual tenth birthday of this blog/me blogging but I can’t let a milestone like that go unmarked, can I? 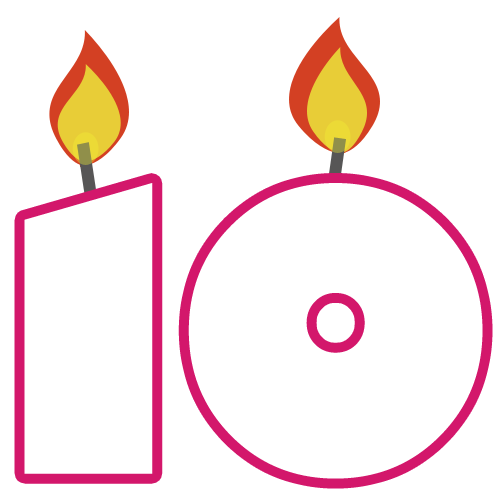 Originally started as a place to store and share links, this blog gradually became a place to playfully interact with the world, and over time that turned from introspection to exploration of the world, media, experiences and ideas. I don’t think I’m alone in that kind of journey with blogs.

I am immensely (unreasonably, perhaps even pathetically) proud of having been blogging for so long. I can say confidently that I was in at the beginning, when all this were fields. I was here before many of you young whippersnappers who have gone on to eclipse me, and blogging, and the web entirely in their success and influence. I don’t put my early involvement down to canny prescience about the way the web was turning so much as an inevitability given my proclivity for tinkering with web things, my early academic and personal interest in communicating online and my inability to shut up. Blogging and me; it was only a matter of time and technology before we found each other.

I was there. I remember the start, and the hype, popularisation, commercialisation and ubiquitisation which followed. I couldn’t possibly have known it at the time, but my blogging was to introduce me to dozens of interesting people, influence others to start doing it too, cause interesting opportunities (and worrying situations) to develop. Blogging has become part of what I am, what I do. I blog now for the same reasons I did in early 2000: because I can’t not tinker with and publish to the web.

Ten years ago, I was embarrassed to mention having a blog in polite company, because it was so difficult to understand – not just what but why. These days, even both my parents have blogs. It’s not a weird niche oddball geek thing anymore. It’s so normal it’s almost passé. Good.

Over the years (especially from around 2005) people have asked me again and again what this blog’s about, as if it needed to have a topic or specific theme in order to be consumed. I’ve said repeatedly that it’s a personal lens for consuming and considering the world (and the world wide web), but that rarely satisfies the asker (which I think says more about their requirement for classification than my experimental expression).

But now, a decade on, at least the next time someone says “…but what’s it about?” I can reply with absolute honesty “It’s about ten years old”

I’m pretty sure I started publishing to the web in a bloglike way (dated, reverse-chronological, monthly archives) in January 2000, but the earliest thing I can find on the interwebs is this handcoded beauty from February 2000. If memory serves, it was originally hosted on my AOL member space with my other homepage bits and bobs (which I’d had online at Geocities and Demon and then AOL since the mid 90s) before moving the whole lot over to my own – first – dedicated domain, notsosoft.com, sometime in early April 2000.

For the months of January (wherever that’s gone), February, March and some of April, it was handcoded, until in mid-April I got sick of editing html files by hand and uploading them by ftp every day and switched to Blogger which had recently launched and made everything much simpler.

Ten years of blogging. A decade feels like a long time in so many ways – when I look back at my early posts and think about what I was doing back then and where I was in life, I am amazed how far away it feels. But throughout those ten years there have been very few of the 3692 days (more or less) when I haven’t written something on the blog, or scribbled something in draft, or at very least thought about it and felt guilty for not having sufficient time to devote to doing it.

In celebration of the last ten years of blogging, over the coming days/weeks I’m going to publish a few special ten-related posts which draw on this blog, my experience of blogging and blogging in general. If you’d like to suggest a topic or something you’d like to hear more about, or even just recommend a favourite post from the archives, let me know in the comments below this post.

But in the meantime, raise a glass with me to the last ten, and (hopefully) many more to come.