If you ever write a blog post, article or content piece which is open to comments, you may sometimes be dismayed by the comments which follow it. You may have deserved them. You may not. But people being rude to you in public is never nice, is it?

So rather than feeling depressed and downhearted about the public discourse surrounding your efforts, you can ameliorate any negative feelings by simply using the alternative comment scoring grid below: 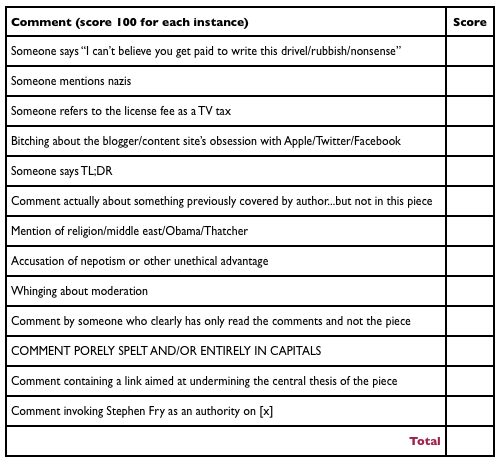 Tot up your score at the end.

If you have scored more than 200 points, CONGRATULATIONS! You have won, and everyone who participated in that thread now owes you a proportionate share of the £ or $ or € equivalent to your score. So, 20 people participating in the conversation and your score is 1000? They each owe you a nice crisp £50. You can go round to their house and collect anytime.

(inspired in part by this parody of a science news story and – more importantly – the 400+ parodying comments which follow it. Nice to see that commenters have such a good knowledge of their own, often unwritten, rules)